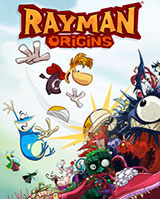 Firstly, no, my keyboard isn’t broken and that bit of Pig Latin was intentional and contextually sound. Secondly, no, I haven’t gone insane as a result of playing this game!

Rayman Origins is, as I attempted to say, is a very good side-scrolling platformer with amazing art. Published in November, 2011, it follows the endeavours of Rayman, Globox and two Teensies to rid the world of Darktoons—evil beings from the Land of the Livid Dead that they unwittingly annoyed by snoring too loudly.

So the storyline isn’t that complex but you won’t care. It’s the gameplay that you’re really here for, and the art… oh, and the music as well. From the opening title screen right to the closing credits, Rayman Origins is stuffed full of creative scenery, props and level design. While the characters themselves exist on a 2D plane, the game sports fore- and background scenery of such beauty that you may even just stop running for a moment to stare in wonder at a tiny dancing mushroom. The music is amusing and reflects the mood of each stage, each of which is vastly different to the last.

As you progress, the game drip-feeds you new abilities and costumes for your selected protagonist. And the best thing about the game? Co-op! Up to three friends can play with you in your own sitting room—a rarity these days, thanks to Microsoft and Sony believing we don’t want to play against our friends while also being in their company, but that rant can be left for another time.

Rayman Origins is a great game and suitably challenging for all gamers, great or small. If you’re a completist, be prepared to dedicate a lot of hours to this one because collecting all the Electoons is going to drive you mad!