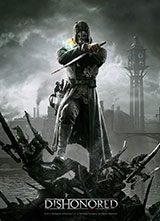 Dishonored comes from the studio that brought us Dark Messiah of Might and Magic and published by Bethesda of The Elder Scrolls fame. Dishonored takes place in a single disease-ridden and rat-infested city on an alternate Earth. The theme is very steampunk and the environments are beautiful in their juxtaposition of grandeur and grittiness. The gameplay is from the first-person perspective and incorporates various powers as well as solid melee and shooting mechanics. The stealthy player will find the Blink, Possession and Dark Vision powers particularly useful while Devouring Swarm, Shadow Kill and Bend Time will aid a player taking on the more frontal assault option.

The story begins with the assassination of the Empress and the abduction of her daughter, Emily. The game then follows the struggle that Corvo, the player, undertakes to find Emily, overthrow the corrupt Regency and find out who killed the Empress.

I especially love the pseudo-caricaturisation of the art style and the creepy use of sea shanties to create a world that doesn’t feel quite right, and for good reason. The environments are designed in a way to encourage exploration and the inclusion of a moral choice system is ample fuel to play this game through at least once. Plus, it has the single most enjoyable DLC I have ever encountered (more on that later).

This game is easily in my top five. Check it out!