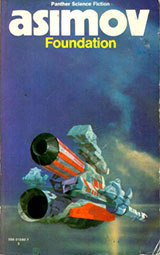 Foundation, the 1951 novel by Isaac Asimov, is set in a galaxy some 12,000 years into our future. Humanity has spread amongst the stars to such an extent they can no longer remember from which planet they originally came. A psychohistorian predicts the downfall of the Empire and a subsequent period of barbarism and puts together a plan to ensure civilisation survives these turbulent years before the galaxy can recover.

I have to admit, I’m struggling a little with this title. While the story of Foundation is fairly interesting, I find Asimov’s writing far from gripping. I shall persist, however, because the only book I have ever given up reading is Anna Karenina, for good reason. Oh, and some fantasy book that had too many dragons in it.

UPDATE: I finally finished it! In short, it was worth it.