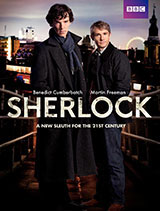 There have been hundreds of adaptations concerning Sherlock Holmes but I am referring to the most recent BBC drama series Sherlock starring Benedict Cumberbatch and Martin Freeman.

While the stories are set in the modern day, they are based on the traditional tales by Sir Arthur Conan Doyle and both the writing and acting is superb. The relationship between Holmes and Watson is sometimes that of quarrelsome brothers or, so thousands of fangirls would happily believe, a married couple. Either way, they’re both great modern versions of timeless characters. If you’re not on the bandwagon yet, get on it. It’s a great ride!