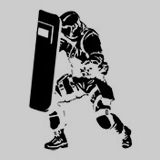 The year is 2130 and Earth is slowly recovering from the nuclear fallout of World War III. Due to radiation, successful births have become rarer and scientists have resorted to cloning to boost the population to a more stable level. However, these clones are not given the same rights as natural human beings and are little more than slaves.

Irvine Linx, a seasoned riot police sergeant, discovers that scientists have continued researching and experimenting with cloning and are delving into highly illegal practises. He makes it his mission to stop them.

This screenplay began as a 3,000-word short story back when I was in university. When I took up the subject Screenwriting, however, I expanded the tale into a fully fleshed-out tale set in a future Sydney. I’ve been tinkering away at it for a while now but I’m glad to report it’s finished and looking pretty polished. Now I just need to build up the courage to show it to someone…!

UPDATE: I was in a strange mood over the weekend and decided to start writing this as a novel, too. Someone, give me a smack!