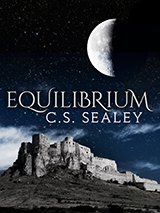 The first novel in the Equilibrium series, Equilibrium is a tale of war, legendary magic, bravery, loss and the struggle between right and wrong.

The six episodes of Equilibrium have been published by Momentum Books, now Pan Macmillan. The episodes are available as a series of short ebooks directly from Pan Macmillan, as well as from the iBooks Store, the Amazon Kindle Store and a range of other online retailers. The omnibus version is also available from all stores.

Generations after the Spirits abandoned the mortal plane, two empires stand on the brink of a final battle to end a centuries-old conflict. Ayons in the north, Ronnesians in the south.

Washed up on the shore of a foreign land, Angora is thrust into a war not her own. Proclaimed one of twelve legendary mages—representatives of the Spirits—she is charged with protecting the innocent with magic beyond her imagination. However, when her allies mercilessly misuse their own powers, she begins to wonder which side of the conflict is the more righteous.

After the abduction of their ruler, the Ayons launch an invasion capable of destroying the Ronnesians once and for all. As the war rages on, Angora’s friends fight bravely as strongholds fall before the mighty crimson wave of the Ayon army.

But when all seems lost for the Ronnesians, a spark of hope is found in an infamous assassin and a fragile rebellion rising from the dust.