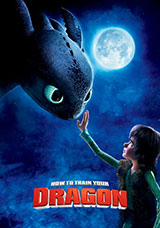 How to Train Your Dragon

In 2010, DreamWorks Animation released How to Train Your Dragon but, because I thought the name sounded silly, I refused to go and see it. Stupid decision. Luckily for me, I have a very persuasive friend who roped me into watching it when it came out on DVD several months later. Needless to say, the next day, I went out and bought the damned thing for myself and watched it again!

Dragons are the most interesting mythical creature, in my opinion (probably because they have nothing to do with virgins, bulls and a twisted imagination), and this movie expands the myth beyond the usual fire-breathing wyrms of the skies.

Loosely based on the book, the story follows Hiccup who is regarded by all as a failed Viking mainly due to the fact that he’s clumsy, thin and would rather design machines than kill dragons. One night, he manages to shoot down (using one of his contraptions) the most feared kind of dragon of all—a Night Fury. Nobody believes him, of course, so he goes out into the forest to find where it landed and hopefully find proof.

There lies the Night Fury, tangled in ropes, completely at the mercy of the young, terrified Viking. Killing the dragon would make him a true Viking, worthy of praise and his father’s respect, but Hiccup realises that that is not in his nature, so he spares the dragon’s life. So begins a beautiful story about self-discovery, friendship, standing up for what you believe in and, above all, bravery in the face of danger and defeat.

The animation is, of course, stunning—you can expect little else from DreamWorks—but what I love about this movie the most (apart from the story itself, of course) is the music, scored by the incredible John Powell. Listen to the soundtrack, seriously, especially Test Drive. It gives me goosebumps every time!

When How To Train Your Dragon 2 comes out, I’ll be first in line at the cinema!