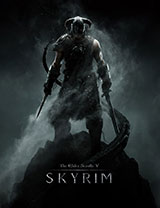 Drem yol lok, gamers. I am Kaalvulnos, dovahkiin, dunmer and slayer of dragons!

To cut to the chase, I love Skyrim to bits and have spent hundreds of hours (no joke) playing it.

I delved very late into Bethesda’s The Elder Scrolls franchise, stumbling across Oblivion back in the day and becoming very quickly obsessed. The form of the game, the graphics and the freedom was something I had never experienced before and I instantly lost myself in the worlds of Tamriel and Oblivion.

Skyrim came out in late 2011, and when I booted up the game and the music began, I fell instantly in love. The world was just so beautiful and crisp, thanks to our new gaming PC, and I spent about half an hour tweaking and re-tweaking my character’s face, making sure her eyes were as sinister and cat-like as possible, the makeup was brooding, the jawline was firm but nicely tapered, the hair was practical for fighting…

When I actually began to play the game, hours just passed in a flurry. Quick travel? Not on your life! I was going to run everywhere, and run away very fast from that troll and that pack of wolves, that sabrecat, ice troll, thief, draugr, spider, spriggan, giant, angry mammoth, hagraven, random elf, bear, vampire, skeleton, random angry mercenary, slaughterfish… and, finally, DRAGON!

I was deeply satisfied with every aspect of this game, especially the lack of ‘collect nirnroots’ quests. The music, scored by Jeremy Soule, is amazing. The character and race designs are diverse and more realistic than ever before. But some of the best things about Skyrim, and anyone who has played this game will probably agree with me, are the glitches and bugs.

My favourite glitch occurred when I was trekking west from Whiterun towards a cave to clear out some bandits. I had decided to put off the main quest until I had racked up a few more level-ups, so I had not yet seen any dragons (apart from Alduin, of course). So I was trudging along a deserted road amid the tundra when, out of nowhere, a mammoth fell from the sky. Not knowing about glitches at this point, I stopped in my tracks, looked up, then promptly scarpered from the unseen monster wyrm that had dropped its prey. I stayed hidden for a good 20 seconds, waiting for the battle music to start up, but it never did. When I finally peeped out from behind my boulder and approached the dead mammoth, it occurred to me that things were not quite as they seemed.

This thought was only reinforced the longer I played when I was forced to converse with people who had sunk waist-deep into the ground, whose heads were turned in unnatural angles and, another favourite, a man who had spawned four duplicates of himself and would only talk to me if I spoke to the right version of himself!

Ah, but to wrap things up, this game deserved the number of hours I spent with it and then some. The expansions were great (yes, even adopting children was fun for a time) and the main quests where you could take one of two routes gives the game great durability and replayability (should be a word). I still hate zombies, though.