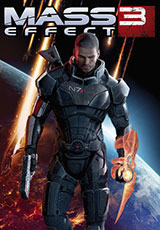 ‘Believe it or not, this damn gun still needs calibrating.’

Not for the first time (or even the second or third, come to think of it), I’ve found myself on the command deck of the SR-2 Normandy in the boots of Commander Shepard, playing Mass Effect 3. With the help of my personal favourite companions in the game—Garrus Vakarian and Javik—it’s our job to unite all sentient races before an army of ancient machines wipes out all life in the galaxy. No small job, but nothing Shepard can’t handle.

What brings me back to the Mass Effect series again and again is an award-winning combination of excellent storytelling, good action, awesome music, great voice acting, diverse and well-rounded characters, beautiful locations and a moral choice system. I can’t tell you how many times I’ve replayed a section just to see what would have happened had I chosen the paragon dialogue options!

Join the Alliance now! The galaxy needs YOU!