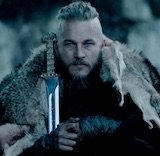 I’m a bit behind when it comes to TV shows taking the world by storm, a woe be to those who try to throw spoilers in my face.

So despite the fact that Vikings has been going for a few years now, I only recently started watching it (mostly because my colleagues emphatically suggested it and I got tired of retreating behind a wall of loud music every time they entered the office and exclaimed, “Did you watch the latest episode last night?”).

I have developed what I like to refer to as the ‘Game of Thrones treatment’, which means I have to give a show at least three episodes of my time before deciding whether or not to continue watching it. This comes from the fact that the first two or three episodes of Game of Thrones Season One were very context-explaining-heavy, full of introducing characters and political dynamics etc, and not much action happened—which does not reflect the rest of the production.

Vikings passed this test in the first few minutes. Unlike Game of Thrones, I was immediately hooked by this Irish-Canadian production about raiding and trading. Starring Travis Fimmel as Ragnar Lothbrok, Katheryn Winnick as Lagertha and Clive Standen as Rollo, this show is full of rich characters and strong plots. Plus, there’s not a horned helmet in sight and everyone is covered in mud most of the time!

One of the things I love the most about this show is the grittiness of the lives they all lead. You get up close and personal with the Northmen (and later the Saxons and French) in their daily activities, as well as rituals and politics. Friends and allies turn on each other for political gain, while enemies partner up a moment later to take on a common foe. It’s complex and amazing; however, unlike Game of Thrones, you’re not left wondering, “Where are we? Who is this? What are they talking about? Why are they fighting?” The cast is diverse but small enough to keep track of, and you’ll fall in and out of love with them as they trudge along their personal journeys.

Also, the hairstyles are fantastic!