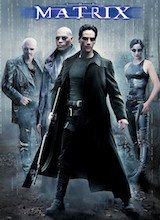 I simply love it when movies you’ve seen multiple times still manage to throw you off balance with something new that you never noticed before. The Matrix is one of these movies and, after watching it again a few days ago, I’ve realised just how timeless this movie is. Yeah, okay, they’re using phones that have buttons on them and computers that are as wide as they are deep but that’s not the point. The ideas are timeless.

Imagine a world where humans are not born but grown—each an organic battery to power an army of machines. To keep these humans an unconscious race of slaves, the machines created a system to let each individual believe that they were living out their lives in the world we see around us today—walking, talking, eating, working, playing… Those who saw through this deception freed themselves and others and live down in the base of the now ruined earth, struggling to survive. However, a prophecy was made of a chosen one who will rise to fight for humanity and eventually set them free from the machines.

Created by the Wachowskis, this 1999 science-fictional movie—starring the likes of Lawrence Fishburne, Keanu Reaves, Hugo Weaving and Carrie-Anne Moss—has a very unique look still to this day. Two of the things that made this movie visually stand out at the time (and ground it as a classic today) was the introduction of ‘bullet time’, a technique that was achieved in a number of ways to pan around a character in action, and also the use of martial arts as the dominant fighting style, complete with ‘wire-fu’.

The only thing I don’t like about this film is the slightly cliched relationship arc between Neo and Trinity—two very powerful characters in their own right. To us as viewers, there is very little to particularly like about Neo except perhaps his gutsy attitude towards the agents and his courage when he decides to rescue Morpheus. He is a classic reluctant hero. We know next to nothing about his personality but just accept that Trinity has somehow fallen in love with him by watching him through the Matrix, which is more than a little stalky. And for Neo to develop affection for her in return seems, to me, basically a case of, ‘Hey, I’m the most attractive guy in the cast, you’re the girl with the most screen time… let’s make this happen.’ But don’t get me wrong. I love Trinity. The following movies develop her character further but we are constantly being told by her and other characters that she’s in love. With what? A plank of wood? Sorry, Neo. You can fight 100 guys at once but you need to learn emotions.

If you haven’t seen this movie and the following two in the trilogy, I’d highly recommend getting out from under your rock and doing something about this problem! There’s fighting and philosophy, robots and trenchcoats. And explosions. What more do you want?