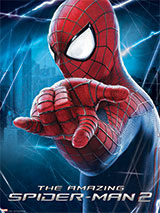 First up, I’m really enjoying this Spider-Man reboot franchise so far. I think the casting of the main characters is great and, for the most part, the dialogue is witty and natural.

The Amazing Spider-Man 2 opens with a flashback to the time when protagonist Peter Parker last sees his parents. This scene progresses to reveal that Richard and Mary Parker were fleeing with scientific secrets and that they were in fear of their lives. Rightly so, it turns out.

Back in the present, Andrew Garfield’s Spidey is continuing to struggle with his vigilante life and his personal life. His on-off girlfriend Gwen—played brilliantly by Emma Stone—finally breaks up with him when, again, he tells her that their relationship puts her in too much danger. The arrival of childhood friend Harry Osborn—Dane Dehaan—however, proves to be far from the emotional pick-me-up that Peter sorely needed when Harry admits that he is dying of a hereditary disease and only Spider-Man’s blood can save him.

As though that wasn’t enough for Peter to deal with, OsCorp engineer Max Dillon—Jamie Foxx—is electrocuted and falls into a tank of genetically mutated electric eels (as you do), which gives birth to Electro. After stumbling around Times Square in a confused state, a scared and confused Electro finds himself surrounded by policemen with guns and lots of power sources. The arrival of Spidey eventually leads to Electro’s capture, an event that finally gains Spider-Man the hearts of the public.

Meanwhile, OsCorp is busy firing Harry Osborn. When Spidey refuses to give Harry a sample of his blood—mainly because he fears the spider-gene will turn him into a crazy mutant—Harry seeks out Electro, the only person who, so he believes, will be able to get him back into OsCorp’s secret labs and the cure he needs.

And so begins the crazy last half hour of the movie!

While I thoroughly enjoyed this film, there were a few things about the plot that grated with me. I could rant about them for hours, but for sanity’s sake, I’ll just list them. Firstly, the lack of development in the creation of the Green Goblin and his suit and gadgets. Secondly, spoilers, how did Gwen actually die? Thirdly, was the revelation that Richard Parker wasn’t a traitor merely supposed to be a catalyst to make Peter feel better about his dad or will there be more on this in the next instalment? Finally, the movie crammed too much in to the last twenty minutes and potentially ruined Green Goblin for this particular version of the franchise. In my opinion, the film should’ve ended with Electro killing Gwen in his death-explosion, then cutting back to the OsCorp labs with Green Goblin crawling across the floor in pain and discovering the armour. A bit dark, yes, but it would’ve been better than the last twenty minutes, cramming Green Goblin in like that!