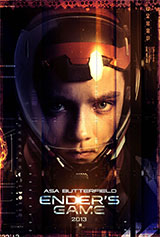 Based on the novel by Orson Scott Card, Ender’s Game is a science-fiction movie set in the not-too-distant-but-still-fairly-far-away future. The concept involves the preparation of the human race against the apparent returning threat of an alien species called Formics. These bug-like creatures attacked the Earth about fifty years previously and, in an attempt to make sure another invasion attempt never occurs, Colonel Graff—Harrison Ford—endeavours to get Ender—Asa Butterfield—enrolled in Battle School where gifted children are taught to become military commanders.

Ender excels through the ranks at Battle School, picking up a motley bunch of friends and also ruffling a few feathers. With each confrontation posed to him, either through training simulations, battle games or from disgruntled peers, Ender demonstrates his prowess for strategising, further instilling in Colonel Graff the belief that Ender is the one to lead them into the final battle against the Formics and, hopefully, victory in the battle to prevent all future battles.

Before finally getting around to seeing this movie, I had to wade through a lot of bad reviews, reviews that almost made me reconsider even giving this film a go. However, I persevered and sat down to watch this film with very low expectations. The best thing about having low expectations is that, quite often, I am pleasantly surprised—as I was by Ender’s Game. Coming from a background of not having yet read the book, I could approach this film for what it was in and of itself without the weight of having to be compared with the novel. I enjoyed myself. Though there were times I could predict exactly what was going to happen next (perhaps due to filmic techniques rather than plot), I thoroughly enjoyed the twist and the range of emotions displayed by Ender afterwards as he dealt with the consequences of what he had done.

The special effects were very crisp and believable and the alien worlds and environments sufficiently futuristic and foreign. Though I do have an issue with how bug-like creatures could progress as far as they apparently did in technology without flexible limbs and so on, I was completely absorbed in this out-of-this-world film and really enjoyed the fact that, for once, New York (as a visible representation of all human civilisation) didn’t get destroyed! Seriously, it happens too often, it’s annoying, Hollywood.