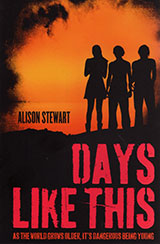 This 2011 dystopian novel by Alison Stewart tells the story of Lily, a teenager trapped in a ‘privileged’ society in our not-so-distant future.

The world is ravaged by heat and high UV. Only those who are rich enough live inside the Wall that encases the richer suburbs of Sydney around its beautiful harbour. However, life inside the Wall is not as perfect as it appears and, after her brother Daniel goes missing in suspicious circumstances, Lily is determined to find out what has happened to him before the same happens to her.

Days Like This is a very enjoyable read and Stewart isn’t afraid to touch on very adult subjects such as drug use, child abuse, rape, global warming and its consequences, violence and the aftermath of natural disasters. I found the book very hard to put down, as my poor husband can attest, and I’d highly recommend it to anybody wanting a good read, YA or no.